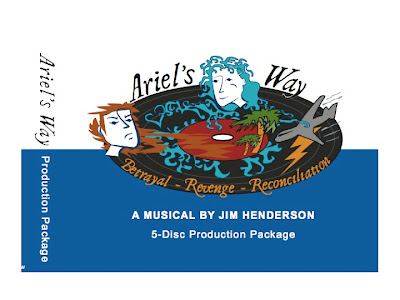 A five-disc “production package” is now available for theatre organizations that are interested in putting up their own version of Ariel’s Way.

Disc One is the completely realized DVD of the professional premiere of the show, directed by Eric Love. This live recording from 2010 features video from three cameras (directed and edited by Mark Goodwillie of Pelican Productions) and 48 audio tracks (mixed by Hubert Deans of Snow Hill Music). It took me most of a year to put this video together.

Disc Two is a music CD featuring 16 songs from the show. These studio recordings were fully produced by Tony Bowman and feature Tony and Deanna Jones on lead vocals, along with Ronda Bowman, Caitlin Linney, Dave Smith, and Dee Dudley-Mayfield. Instrumentalists include Tony along with Drew Lile and Dave Smith on guitars, me on horns, and percussion by Beverly Botsford.

Disc Three is a data disc that includes the latest version of the Ariel’s Way script plus other script-related print materials. This disc also includes all the graphics created for the premiere, set and costume designs, and the printed score (28 pdf files of lead sheets, vocal harmonies, and key instrumental parts for every song in the show).

Disc Four is a data disc that includes seven tracks of incidental music specially created for the show, 11 audio tracks (performed by Beverly Botsford) that break down and demonstrate the “Lime Grove” percussion parts, 21 mp3 rehearsal tracks (fully-produced versions of all the songs in the show), plus the 22 sound effects used in the professional premiere.

Disc Five is a DVD that shows only the wide-view, back-of-the-house video recorded at the professional premiere. This disc is for use by directors, choreographers, and others interested in seeing blocking, entrances, and exits. It is NOT meant to replace Disc One.

The talented Durham (NC, USA) designer Claudia Fulshaw created the beautiful artwork for this five-disc set, which sells for $150.

Click HERE to visit the Ariel’s Way website for ordering details.
Posted by James G Henderson at 6:41 AM 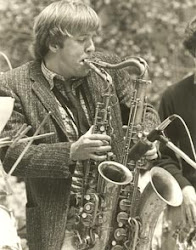